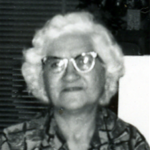 Near our apartment house in East Cleveland there lived a short, beautiful, feisty woman.  Her voice was barely audible, a near whisper.  She had an operation on her vocal chords in the early 1940s robbing her of volume, though as I discovered, when she needed to reprimand me, her grandson, I had no trouble hearing her.  Rose DiFranco was my mother’s mother.  Other than my mother, gram was my greatest female influence.  I learned lifelong lessons such as a woman can live on her own, be happy, productive, and independent.  Gramps and gram separated before I was born.  Gramps lived with one of his married daughters for years, then tragedy befell the household and gramps came to live with us.  Gram owned a big house and rented out rooms.  That was her means of survival.

I would have rented a room from her, too.  As part of their payment she fed the array of characters a few times a week.  I would spend weekends at her house and assimilated quite well.  Pete, a boarder of long standing was like a buddy to me.  I would guess he was in his fifties and got along with gram famously. Saturdays gram made bread.  The loaves were huge.  They were round, at least 14 inches in diameter and probably 7 inches in height at the middle.  Gramma Franco, as she was affectionately called, would hold the warm loaf in her left hand pressing it against her chest at a ninety degree angle to the floor.  Placing a knife on the outside edge of the loaf and parallel to the floor she’d draw it across the bread creating a slice of bread.  No ordinary slice:  it was 6 or 7 inches long and one inch thick and the crust was hard and crunchy.  Down goes the bread and the slice.  She finds the homemade jam and trowels a 1/2 inch on the slice and it becomes part of the airy white.  Pointing to a chair she’d say, “Sit, mangi, and try not to make crumbs,” as she passes the slab from her hand to mine.  Try not to make crumbs?  If one has to check their teeth for chips after chomping into the mini-loaf there are going to be crumbs.

I was a prince in the palace kitchen.

The Italian Sunday macaroni and sauce tradition thrived at grams house.  Awakened from my sleepy trance by what would become a familiar din, I follow the noise and discover this 4-foot 10-inch nuclear power plant had completed the assembly of flour and water to create the macaroni of the day.  Today it is homemade cavatelli, pronounced, cav-a-deal at grams, as it was at home.  I get my breakfast before she continues.  I sit and watch as she rolls the dough to just the right thickness.  Then with her head cocked at the correct angle she cut the dough into one inch wide strips.  Putting down the knife she magically turned the strips ninety degrees picked up the knife and sliced the dough into one inch squares.  Freeing herself once again of the knife she took her thumb, strategically placed it onto a square of dough.  Pushing downward and forward she was able to roll the dough creating a “cavadeal.”  One after another, never missing a beat in the Sunday symphony.  Completing the manufacturing process she offers me a unit.  What a treat.  Greedily, I ask for another.  “No, Carlo, two will give you agita.” I may be eight years old but I question in my mind, if two gives you agita, how come I have to finish all of them when we eat dinner.

Pete is up now and offers to take me fishing.  Gram accommodates his request and proceeds to make us a lunch for the road.  She lops off two slices of bread and cuts them in half.  Retrieving two raw meatballs from the refrigerator she presses them into hamburger patties placing each on a slice of bread.  A drizzle of olive oil, pressed garlic, salt and pepper complete the sandwich.  Wrapped in yesterdays newspaper and rubberbanded for security, Pete and me head to Lake Erie.  As most fishing days in my youth very few fish are caught but we drown a lot of worms.  “How ’bout some eats, boy.”  “Yeah, Pete I’m starving.”  We secured our poles and removed the bounty from the oil stained paper.  Savoring each bite of our tartar banquet and chasing the oil dripping from our chin kept talking to a minimum.  After another fishless hour we arrive back at grams knowing we will soon be treated to a “festivita.”  Cavadeal, floating in a deep, thick red sauce smothered in imported cheese, served in a soup bowl and supped with a spoon.  Meatballs and braziole followed by homemade cake or pie.

Gramma Franco lived into her late eighties. Never wanting to burden her children she placed herself in a nursing home where she lived out her final years.