I’ve managed to collect quite a bit of information on approximately 685 Chieuti immigrants to the United States. Although I used the Ellis Island website to gather this information, I couldn’t have done it without the Dr. Stephen P. Morse’s website. His site is a virtual “back door” into the vast Ellis Island database. For instance, in order to extract all of the immigrants from Chieuti, I needed to search by the town name. The Ellis Island site does not provide this feature, but Dr. Morse’s does. For this task, I used his “gold form”; however, you can get lost for days exploring his many interesting links.

The biggest obstacle when searching for your ancestors is the many spelling errors. Whether the errors were made by the person filling out the form or transcribing the form, they can really stump you. For instance, my grandfather’s name was “Donato Miniello” but it was listed as “Donato Mintells.” I don’t know how my sister Carolyn found him! Luckily, there’s now an option to correct the misspellings in the Ellis Island database.

In addition to the misspelling of names, Chieuti is frequently (most of the time) misspelled. In order to net as many immigrants as possible, I had to allow for these transcription errors. I searched by all of these various misspellings: “Chienti,” “Chicuti,” “Chianti,” “Chienta,” “Chiente,” “Chiento,” “Chioti,” “Chievoti,” “Chunti,” “Chanti,” “Chiento,” “Chiens,” “Chientie.” So if you’re not finding grandpa, keep this in mind.

While I’m sure I haven’t managed to get all of the Chieuti immigrants and while I’m also sure that some of my immigrants made more than one trip across the Atlantic, I think the information is nevertheless valuable and interesting from a personal as well as historical perspective. For instance, you can see from the chart below that there was virtually no immigration during World War I. My grandfather immigrated to Cleveland in 1913, but his family could not join him until 1920. Here, the personal is the political. In addition, immigration drops offs entirely when anti-Southern European sentiment in the United States virtually shuts the door and immigration stops in 1924.

If you’re having trouble locating your ancestors, use Steve Morse’s website. If you’re still unable to find them, let me know – I may have them in my database and I’m pretty good and tracking them down. 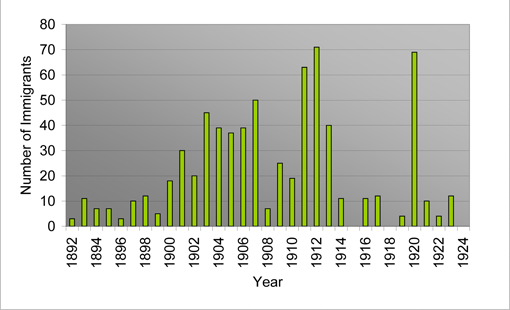 As you can see from the pie chart below, the majority of Chieuti immigrants went to Pennsylvania, specifically Pittston, Pennsylvania. While the early immigrants (1892-1895) went to New York, towards the end of the century, most immigrants were listing Pittston as their final destination. Even though Pittston continued to be the primary destination for most immigrants, by 1910 Cleveland became a frequent destination, and by 1920 Chieuti immigrants heading for Cleveland outnumbered those heading for Pittston. My guess is that the immigrants continued to move out (primarily westward) from the original settlements looking for work. Again, this lines up with my own personal family history. My great uncle Giorgio Ferreri was the first in the family to immigrate in 1900, and he headed for Pittston. By the time my grandfather immigrated in 1913, he headed for Cleveland, where Giorgio had moved and bought a house. 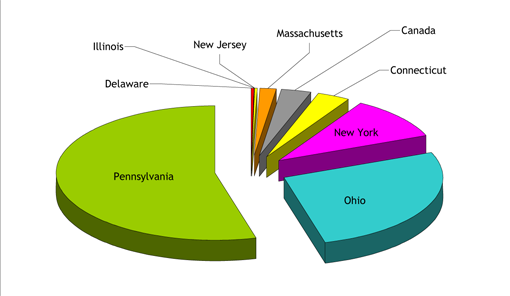 Although the majority of Chieuti immigrants went to (1) Pittston, (2) Cleveland, and (3) New York, they went to other cities as well, including Wilkes Barre, Hillsville, Pittsburg, Scranton, Philadelphia (all in Pennsylvania); Litchfield, Connecticut; Waterbury, Connecticut; Montreal, Canada; Lorain, Ohio; Medford, Massachusetts.

Age and Gender of Immigrants

Here’s one more interesting way to look at the data. Up the the age of 19, the gender of the immigrants was roughly equal. Between the ages of 20 and 49, more men than women immigrated to the U.S. After age 49, women outnumbered men, but only slightly. 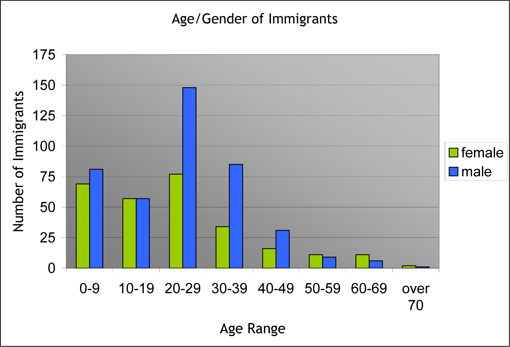